The Beach Hotel on Danish TV2

Experience the beautiful west coast of North Jutland in the tv show "Badehotellet" (The Beach Hotel) on Danish TV2, a sixth season was aired in 2019.

The sixth season of "Badehotellet" takes place in 1939 and the hotel has changed a lot. The TV show premiered in 2013 and is one of the most popular tv shows ever in Denmark. Stream season 1-5 on TV2 Play, from the comfort of your own home. On this page, you can read about the locations in beautiful North Jutland and the history of the great days of the Beach Hotels in Denmark. Read about the "real" beach hotels here.

"We believed it to be the most beautiful location. We have scouted many coastlines and when we saw this place we had no doubt" - Producer of the show, Michael Frandsen.

According to Michael Frandsen, it was not possible to film the TV show on one of the already existing beach hotels, as they are all situated close to other holiday homes. This would make it hard to create an illusion of the roaring 20's. The only opportunity for an existing beach hotel was Svinkløv Beach Hotel, which is situated perfectly amongst the dunes. But the beach hotel is so popular that it would not be possible to rent it for the filming of a tv show. Svinkløv beach hotel burned down in 2016 but was rebuilt and opened in 2019.

The TV show takes place in the years 1928-1933 at 'Andersen's Beach Hotels' by the west coast of North Jutland. Here regular visitors from Copenhagen have fun amongst the hard-working locals of North Jutland. The roaring '20s is a time where the world was bright, the optimism was flourishing and the economy was excellent. But dark clouds were looming and soon the visitors to the beach hotel would feel the crisis and the crash of Wall Street. 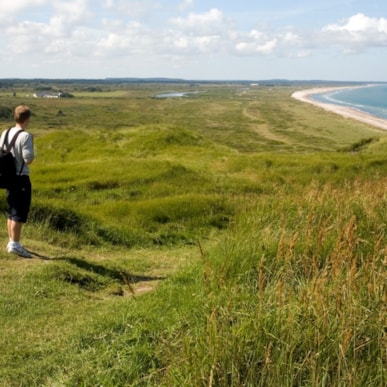 Svinklov Dune Plantation (in Danish: Svinkløv Klitplantage) is a 700 hectar large state-owned area that is open to the general public. The shallow part towards south was up until the Middle Ages an open strait connecting the North Sea to the Limfjord. The breathtaking scenic view from the ...

Slettestrand is a recreational area boasting some of the very finest and most varied scenery to be found in Denmark– a white sandy beach of Blue Flag status, sheltered behind low dunes and no cars allowed.

Visit one of the beach hotels in North Jutland

The beach hotel used in the TV show is a set-piece and therefore you cannot stay there. But North Jutland offers lots of beach hotels and the accompanying atmosphere and idyl.

Right by the water, on the edge of the sand dune is Svinkløv Beach Hotel. A place to stay and relax in the middle of nature. Wake up to a view of the ...

Between the iconic and historic yellow houses of Skagen lies Ruths Hotel. The hotel is located in Gammel Skagen close to beautiful nature and a specta... 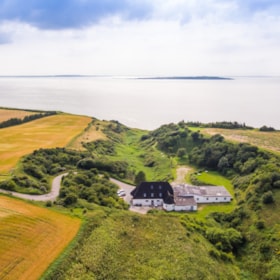 Welcome in the calm and beautiful surroundings of Næsbydale Seaside Hotel.Næsbydale is more than just a place… it is a condition.When going down...

The clear sky of Thy, the wind and the beautiful landscape is the perfect backdrop for Stenbjerg Inn and Beach Hotel.

Explore the history of the beach holiday

As seen on TV