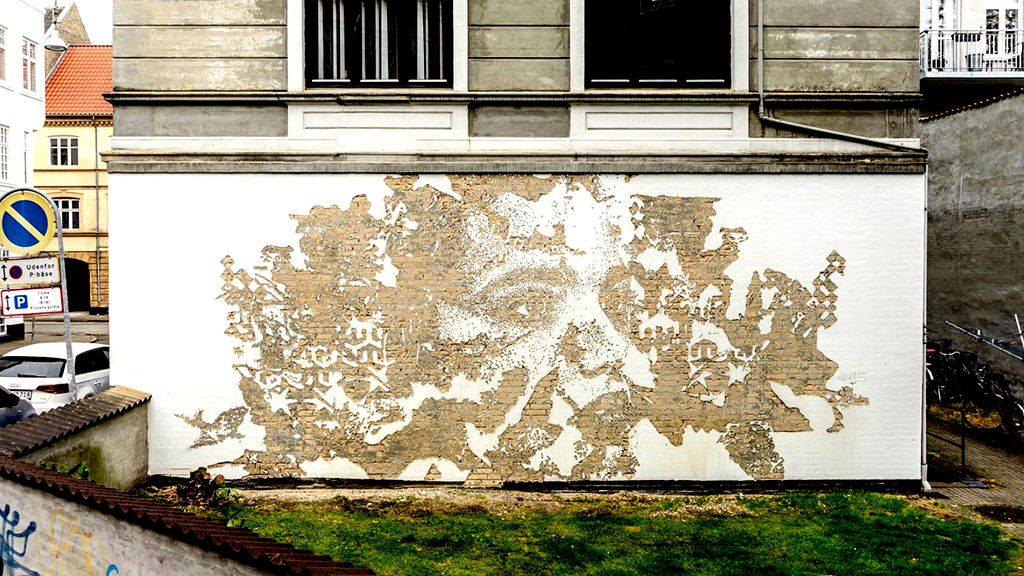 The Portuguese artist Vhils is world-renowned for his technique, where motives are being carved out in walls. The purpose of the Out in the Open-project is to bring art from the galleries to the street.

KIRK Gallery in launched in 2014 the Out in the Open-project which has resulted in some of the most recognised artists in the world coming to Aalborg.

Once again the gallery was able to present a new piece, this time, by the world-renowned artist Alexandre Farto aka Vhils.

This artwork is an addition to his “Scratching the Surface” project and is a portrait of a young woman – one of the daily heroes. The Portuguese artist often portrays daily heroes, as a tribute to the citizens of the cities, he is painting in.

With his new initiative on Danish ground, the first part of his work was created at night, where the citizens of Aalborg could wake up to a glimpse of, what was coming. Using his groundbreaking technique, based on the removal of the outer layer of the wall with untraditional tools, has been praised as one of the most convincing approaches to art, created on an urban art scene on a global scale.

Other participating artists in the “Out in the Open 2019” is; Fintan Magee (AU), Seth (F), Telmo Miel (NL), Oliver Vernon (USA), Joram Roukes (NL), Nils Westergard, who each contribute with their peculiar vision to the public space.

About the project “Scratching the Surface”

Vhils has developed his “Scratching the Surface”-project since 2007, with more than 90 pieces spread between 30 countries in a wide variety of different contexts. A continuous series of large wall compositions in the public space, where they have been carved out of walls with chiselled strokes, where each individual layer creates the necessary contrast and depth to put soul into a piece.

The project mainly portrays human portraits, with the purpose of putting soul into the cities and to humanise the public space.

About the artist VHILS

The Portuguese artist Alexandre Farto aka Vhils (b. 1987) began to interact with the urban environment at the beginning of the 2000s and has been praised as one of the most innovative artists of his generation.

His inspiring portraits can be experiences in cities all over the world.

Based on vandalism, Vhils breaks down walls, in order to create. He carves, chisels, etch and blows his way through the layers of material. But as an archaeologist, he carefully reveals the beauty, which has been kept trapped underneath the surface.

Since 2005, Vhils has been presenting his work in more than 30 countries in both solo and group events, place-specific art conventions and other projects. He has worked together with different groups, from the local community in Rio de Janeiro “favelas”, to collaborations with recognized artistic and museologically institutions as EDP Foundation (Lisbon), Centre Pompidou (Paris), Barbican Center (London), CAFA Art Museum (Beijing) and Museum of Contemporary Art San Diego (San Diego).

Eager to experiment, Vhils has created his own personal aesthetic in multiple different media, from stencil painting to etching in metal, from pyro technique explosions and videos of sculptured installations. Vhils has also made several music videos, short films and a scene production.