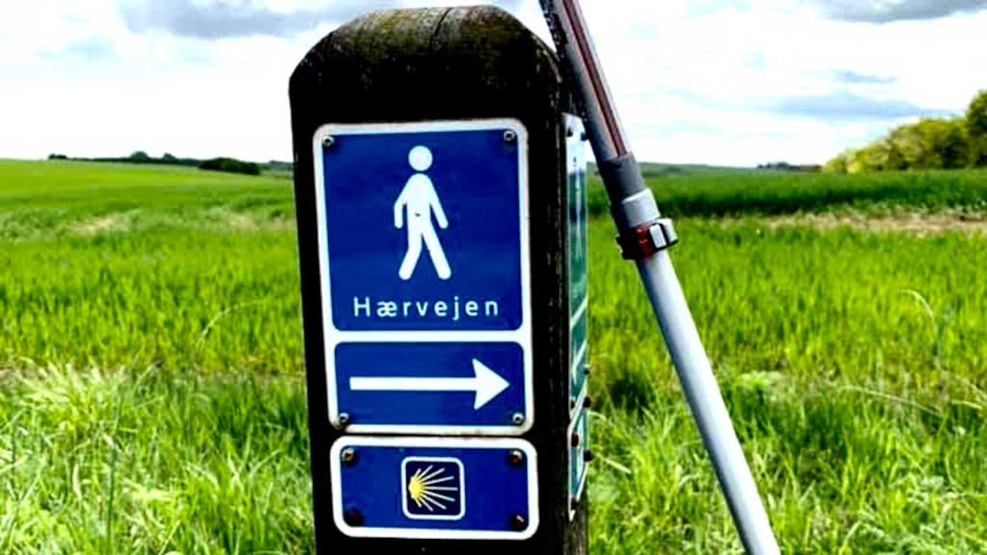 Enjoy a biking trip alongside Hærvejen (The Army Trail) in Frederikshavn. The trail stretches from Frederikshavn to Jyske Ås (The Jutland Drumlin).

This path will take you through the beautiful hilly scenery southwest of Frederikshavn; first through the small, rural roads alongside Bangsbo River-Valley and then by gravel road through the Hestvang domain and Hørbylund Manor House. As you travel towards Østervrå, the trail becomes more level, as you reach a grand plateau that is an old branch of a fjord. This path ends at Nymølle Bæk (Nymølle Brook); one of the most fantastic natural areas of Vendsyssel, located just at the outskirts of Jyske Ås.

The Hærvej-trail of Frederikshavn starts at the tourist office. From here, it will take a few kilometers outside of town for you to reach the Bangsbo-area, where you will find plenty of things to see and places to stay at. Some prominent contenders include Bangsbo Zoo, Bangsbo Botanical Gardens, Bangsbo Museum, Bangsbo Manor House, and the Natural Playground. You could also take a slight detour up to Pikkerbakken, where you can enjoy a view of all of Frederikshavn, Albæk bay, and, in nice weather, even all the way to Skagen. You can bike all the way to the top by gravel road.

From Bangsbo you will be going through the inviting Bangsbo River-Valley, past the Donbæk Burial Site and Kongehøjene (The King’s Hills Burial Site).

Both Kongehøj and Borgbjerg can be seen from the road, and both are part of the Donbæk Burial Site, which features a grand total of 60 burial mounds spread in a narrow line through the hilly scenery. In the early 1900’s, archeologists discovered several urn graves from the Early Iron Age, along with several other interesting artifacts, such as a gold bracelet.

Archeologically speaking, it is a fascinating area where new discoveries and observations are made every few years. The area is publicly accessible, meaning that you are free to walk in and examine the mounds.

From the Bangsbo River-Valley, you will be going southward along Hestvangsvej; a fairly long gravel road, that twists and turns elegantly through the hilly scenery. While on this path, you will be feeling the serene calmness of rural Jutland, so enjoy the ride and forget that you are driving on a gravel road.

Well beyond the gravel road you will cross Hærvejen’s hiking trail. If you turn east and follow the hiking trail for about 500 meters, you will find a cosy shelter by the Granly institution.

After leaving the hiking trail, you will once again continue through the rough terrain towards Karup. From here, the path follows the hiking trail for about 4 km past Karup Church and a sacred fountain called Helligøbben. The trail also takes you past Hørbylund Manor House, and at this point, you are about half-way between Frederikshavn and Jyske Ås.

The path from Hørbylund to Østervrå will go through more open and flat terrain than so far. Here you do not have to worry about a plethora of hills and can focus on the mileage rather than escalation. On your way you will pass by a cluster of houses known as Søholt, as well as Gersholt Sø (Gersholt Lake). The latter happens to be the largest lake in Vendsyssel. By Søholt a regional biking trail (Route 61), with an outset in Tolne, will take you towards Skiveren.

The final stretch to Østervrå is on a large, open plateau where you can enjoy a peerless view over the scenery of central Vendsyssel. This path is in the end of an old fjord branch called Volstrupsletten (Volstrup Plains). As such, the fjord has once reached all the way into Østervrå.

In Østervrå you will find some options when it comes to shopping. There’s also an in-door swimming pool, which could provide you with a bath if you’re so inclined. They even have a shelter by the sports field at Bredgade.

From Østervrå you can bike through serene and beautiful surroundings through small paths. You’ll be passing Voer Å (Voer River), which meets the ocean by Voerså. At the outset of the preserved area of Nymølle Bæk (Nymølle Brook), you’ll once again be crossing the hiking trail. Here we would like to recommend you take a break from your bike and go for a walk by Nymølle bæk, as this is one of the most picturesque natural areas in all of Vendsyssel, and features such habitation as a birchwood, meadow, heath, pasture, stream, lakes and bogs filled with alder.

If you take the path alongside Nymølle Bæk, you will walk across a beautiful bridge made of hewn stonework built sometime after 1600; the exact year is unknown. Another interesting fact about the area is that Ingeborg Skeel (1545-1604) was the lady at Voergaard Slot (Voergaard Castle), and ran a glassworks by Nymølle Bæk. You can still find pieces of glass from back then lying around today where the glassworks used to be.

Driving away from the region, the bicycle trail will take you down small roads. After a few kilometers, it takes a left turn, heading southward. If you’re in need of calling it a night, you could instead keep going west following the regional biking trail (Route 60), and in just about 500 meters, you’ll arrive at a big shelter site; Naturskole Lunken.

If you instead opt to continue along the final stretches of the road southward, you will quickly arrive at a big road. If you leave the trail here and go left along the road (meaning towards east), you will arrive at the rural town Brønden after about 1,5 km, where you will also find a very nice shelter site.