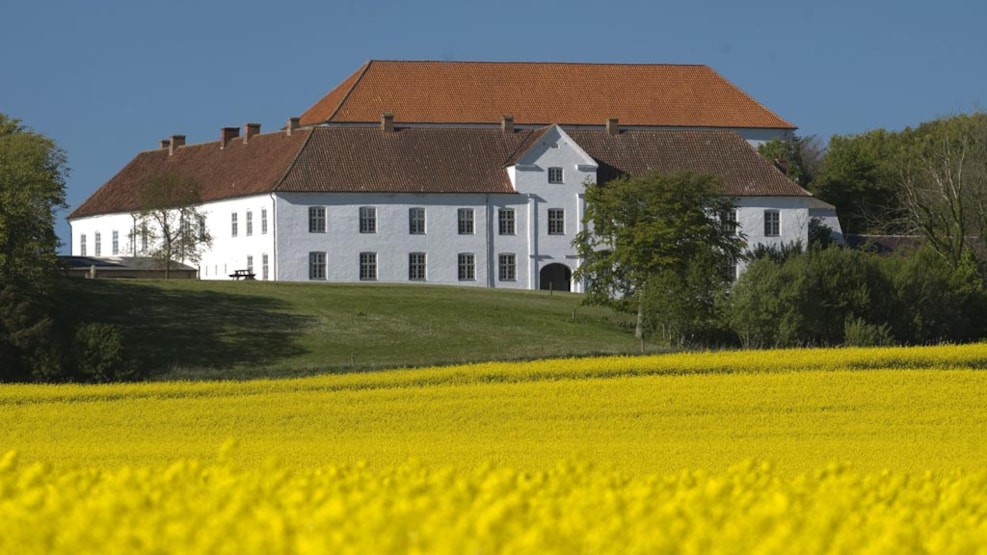 Børglum Abbey has an impressive 13th century cathedral. Access to 3000 m2 historical and artistic exhibition on Stygge Krumpen and Chr. Michael Rottbøll. In 2011, the abbey served as the setting for TV2's advent calendar tv series "Ludvig and Santa Claus" - see exhibition in the abbey.

The abbey was built from 1035 to 1220 by Augustiner monks. Later it was the Praemonstratenser monks who lived at the abbey. Until the reformation in 1536, the abbey functioned as a monastery for monks. Afterwards it became royal land. From 1536 to 1669, the yard was run by royal selected vassals until it in 1669 was passed into private ownership. The Abbey has been rebuilt in 1650 and in 1750, latest by royal master builder Laurids de Thura.

Børglum Kloster Mølle is an old Dutch wooden mill, situated on Bodilshøj 53.78 meter (a.s.l). It is a so-called Dutch smock mill, built 1860, restored 1963. Top section & top-hat made out of wood, wing span 11 m. Bodilshøj is a burial mound with St. Bodils Kilde nearby with a memorial stone & the Old Forge, which has always belonged to Børglum Abbey, and now functions as a restaurant. "Møllehøjen", is Danish for a grave mound & the site of the holy well of Sct. Bodil. At the top you will get a view of the entire region: to the north Rubjerg Knude sand dunes, to the south almost all the way to Aalborg on a clear day.

Today it is Anne and Hans Rottbøll who own and live in the abbey together with their family, and they are 6th and 7th generation of the Rottbøll family who owns the Børglum Abbey. Mr. and Mrs. Rottbøll have opened the church for the public and created several exhibitions linked to the past of the abbey and the manor house. Furthermore, during the summer period there are several artists displaying their art.

*Season card PLUS: Includes the card owner and 3 companions.

Don't stop the wanderlust after your visit on the abbey. There is more to see in the area!