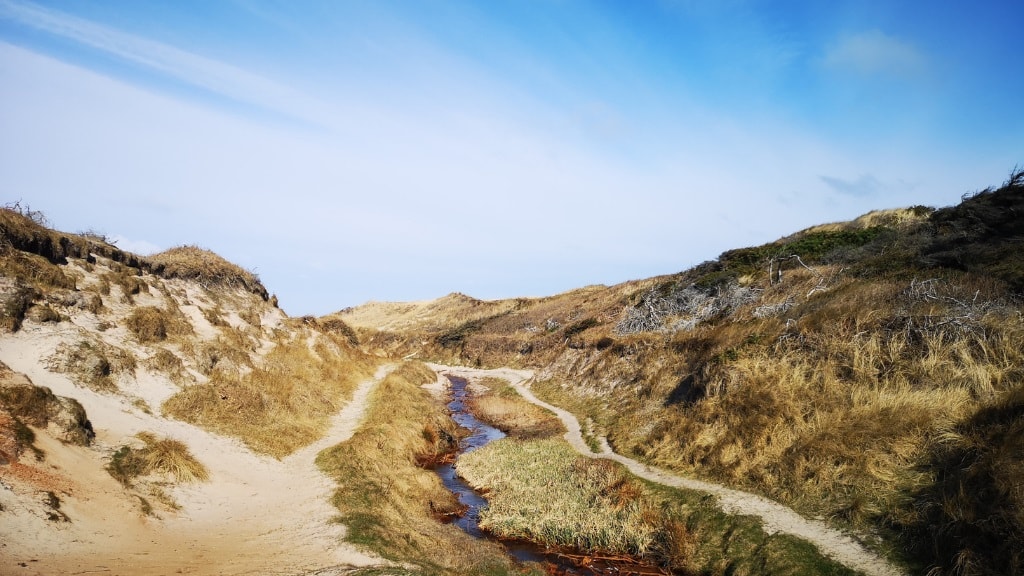 The first trees in the area were planted in the late 1800s and alternate between mountain pine, oak scrub, Norway spruce and Austrian pine, which have a grip on the good clay soil deep under the sand.

The sea mark - the beacon

Follow the path up to the hill, the high sea mark, which rises high above the vegetation.

The red-painted beacon, built of strong iron girders and timber, has an hourglass-shaped top. It was built in 1884-85 and served as a landmark for the seafarers.

The beacons along Jutland's west coast were designed with individual shapes so that they could be identified in relation to the nautical chart where the beacons were drawn. From there you could determine your position - of course, show only in daylight.

New technology has made the beacons superfluous, but they are protected and stand as large sculptures in the dune landscape.

The name Bøgsted Rende means the »building site by the trench« and does not, as many wrongly translate, have anything to do with the beech (bøg) trees. In the 1600s and the 1700s there was a water mill by the channel flowing into the sea. It was probably the sand drift that prevented the locals from running a water mill in this place. Sand filled up the watercourses and kept back the water pressure necessary to run a mill. The brownish red colour of the water is due to ochre, oxidised iron compounds from the forest ditches adjacent to the trench.

The oldest living trees in the area were planted in the late 1800s. Furthest west you will find mountain pine and thickets of oak so low and wind bent that you have to bend down to pick acorns. Further in along the trench are silver fir and Austrian pine of impressive thickness. Here it is evident that the roots have a good grip in the good clay soil deep beneath the sand.

A path leads up to the beacon; a tall seamark rising above the vegetation. The red beacon made of strong steel girders and timber has an hourglass-shaped top. It was built in 1884-85 and was a landmark for seafarers. The beacons along the west coast of Jutland were designed with individual shapes, so it was possible to identify them on nautical charts. This made it possible to determine one’s position, but naturally only in daylight. New technology has made the beacons unnecessary, but they are listed and stand today as large sculptures in the dune landscape.